Julien Duvivier, the king of "sketch" narrative in film, takes his technique to new levels of intricacy and design (even incorporating chance!) in this audacious, freewheeling collision of stories that capture an indelible constellation of Parisian life. All ages are entwined in the anarchic sprawl of life, all of it woven around the slowly escalating danger created by an unbalanced musician desperately trying to contain his murderous impulses.

Duvivier and his cinematographer Nicolas Hayer overlay breathtaking shots and a dizzying array of cuts and transitions into a story that grows dark as naturally but suddenly as day turns into night. Amongst the ensemble, Daniel Ivernel (last seen in LA PASSANTE} gives a standout performance as a doctoral candidate in mortal fear of his examinations, facing one final chance to make good.

Years before the New Wave began to self-famously mess with cinematic reality, Julien Duvivier found himself at a personal artistic crossroads. Torn between the glamour and glitz of comedy and the penumbral sheen of misanthropy in what we now call noir, he sought out a way to show how these competing forces actually did battle on-screen (and in his own mind!). Having just squabbled with his previous collaborator, René Lefebvre, over the tone and approach for SOUS LE CIEL DE PARIS, he struck upon the conceit of battling screenwriters with diametrically opposed approaches to film narrative. Before he knew it, he had Henrietta and her unwitting cast mates in the only meta-comic noir ever made—or is it a noir meta-comedy?

Anyway, Michel Auclair and Hildegard Knef give us the "bad," each tempting the "goody-goodys" whom they randomly encounter (Dany Robin and Michel Roux), while the battling screenwriters (Henri Cremieux and Louis Seigner) threaten to turn the story topsy-turvy as the characters spin their way erratically toward the landscape of their desires. Duvivier sizzles while Paris stays firmly on the griddle! 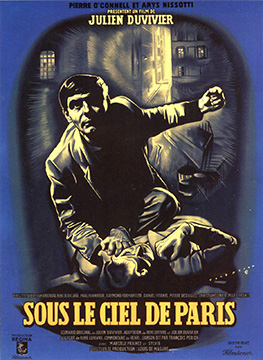 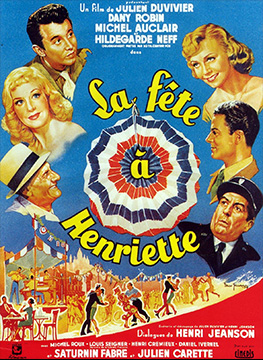 ► TICKETS for DOUBLE FEATURE starting at 6:00